The Story of the Coral Springs Festival of the Arts

The Story of the Coral Springs Festival of the Arts

The story of the Coral Springs Festival of the Arts …or how a CAN-DO attitude, a group of dedicated visionaries, and a dream location forever changed the vibe of the city they all love. 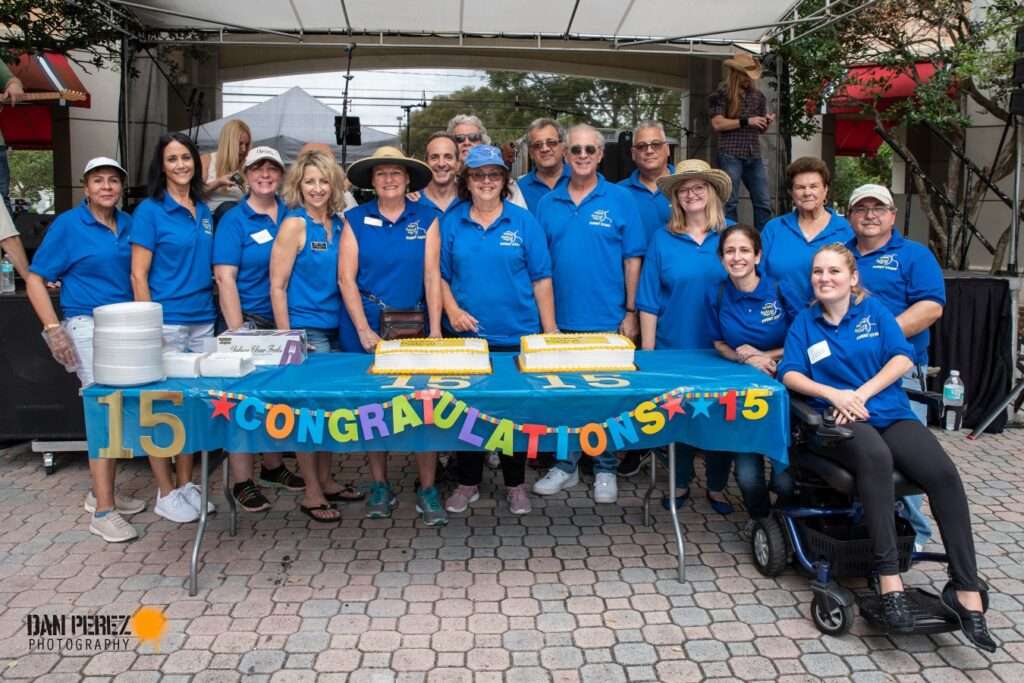 When “they,” said IT couldn’t be done, there was someone who thought, “oh yes it can.”

When “they,” said, “no festival as far west as Coral Springs would be able to attract enough of a crowd,” there was someone who thought the polar opposite.

That someone? Shirley Richards, a local mortgage broker whose dedication to the community and own love of all things “arts” related, has blossomed into the premier event in Coral Springs: the CORAL SPRINGS FESTIVAL OF THE ARTS— and what an event it is!

“I never really had any doubt,” said Richards, the Festival’s founder, “that a festival like this could be successful and sustained west of I-95.” And it was her unwavering determination to prove just that, that has made THIS festival one of our area’s most anticipated and beloved events each year.

“Shirley truly is the heart and soul of the festival,” said long-time friend, business associate, and current Coral Springs City Commissioner, Realtor Joy Carter who has been a volunteer 15 of the festival’s 16-year tenure. “Shirley has always been perfect at motivating all of us.” And by “all of us,” Carter means the tight-knit mini-army of committee volunteers who brainstorm ideas, use connections to procure sponsors, book performers, and artists, and just generally parrot their shared passion to any and all who seem interested.

Says Carter, “My 1st year I was a volunteer at the information booth. The next year I was running it and did so for quite a few years. After I won the Covered Bridge award for civic leadership, Giselle (Rahael) asked me to lunch and then asked me to join the executive board and sponsorship committee.” And she was hooked ever since.

“We wanted to give the community something important. Something the whole family could enjoy, something our community could be proud of,” offered Richards. “In the beginning, we had the CORAL SPRINGS Museum of Art in our city and we leveraged the momentum the arts community was building around that, to involve and engage that growing arts community in our own backyard.”

And that they have. In spades!

When deciding just where such an event could be held within the city, Richards realized the power of the words LOCATION, LOCATION, LOCATION, and instead of tucking this festival into city-owned parks and other slightly off the beaten track locations it COULD have to take place on, Richards went directly to one of the city’s most known, most centrally located privately owned and loved locations and simply stated her case.

“Shirley approached my dad, George Rahael directly to ask if we (Amera Corporation) would host the festival at The Walk,” remembered current Festival of the Arts President Gisele Rahael. “Our family has been in CS since the late 70s and we have always been and continue to be committed to our community. So it was easy for Dad to say yes because the festival’s mission “to raise awareness of the arts and culture in NW Broward, and to entertain, educate and inspire” is consistent with Amera’s mission of adding value and creating spaces that bring people together,” said Rahael.

“The festival is Shirley’s passion,” added Carter. And says Rahael, “Shirley has dedicated thousands of hours of her time and talent to make this festival so respected and to earn it the ‘premier event’ title in Coral Springs. Shirley understands that arts and exposure to the arts breed creativity and innovation which are the building blocks for growth – for our children and for our community.” 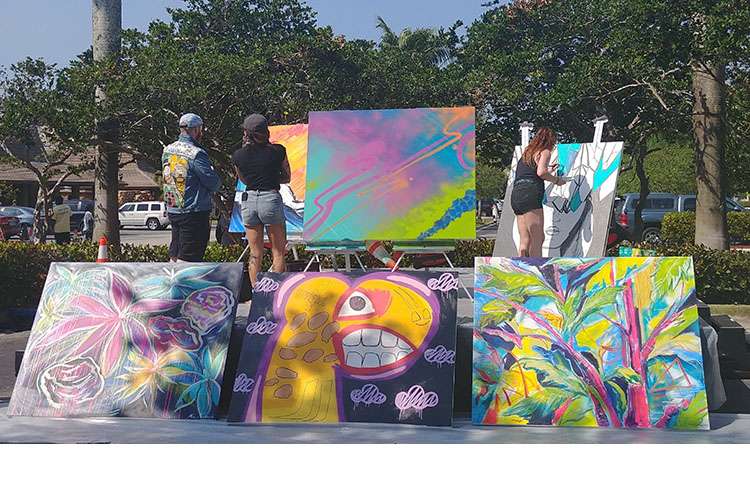 “We’ve learned that the festival impacts the community on multiple levels,” continued Rahael. “Positive economic impact: drawing people to Coral Springs (artists and festival guests) who normally would not have a reason to come here, culturally and educationally by providing opportunities for inspiration and creativity to abound here and also social impact: bringing people together to celebrate, simply enjoy a great weekend and be inspired.”

“4% of the festivals nationwide have a literary component,” explained Richards. “We have 2 stages at our festival, we present every genre of live music, dance, literary arts and the performance arts and of course visual arts.”

And visual arts at the two-day festival component encompasses 200 of the country’s best artists, crafters, and since 2016: Gardenfest. A festival within the festival featuring growers, nurseries, and garden-related vendors covering the south end of the ever-growing (pun intended) event. Another vision born from Richards explained, “I saw Gardenfest struggling to find adequate locations and attendance and simply thought they’d be a great fit.” And it’s been a perfect match ever since allowing Gardenfest to expand more each year.

And her committee credits Richards with the drive to raise funds to keep the non-profit 501c3 festival free to anyone who wants to attend. “It’s important to me,” said Richards, “that the arts be accessible.”

While she’s the powerhouse behind the innovations that make this event bigger and better each year: bringing best-selling authors in, interesting acts on its stages, shuttle buses to ease traffic, handicap access so everyone can enjoy this, she’s now also writing grants to ensure its continued growth and innovations.

“Our purpose is to support the arts and other art non-profits in our community,” offers Richards.

“Over the years, the festival has sponsored a high school art scholarship and donated to other art groups in Coral Springs. We pay it forward so generations to come will be exposed to what all the arts offer.” 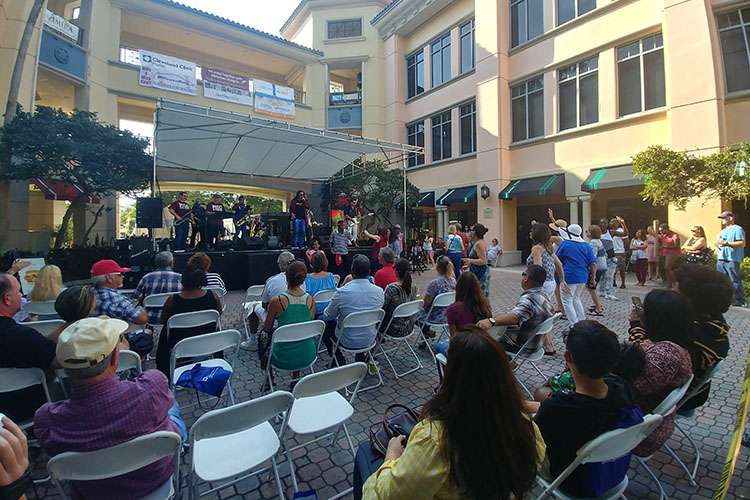 So, if you’ve been before, you KNOW how wonderful this event is. If you’ve never been, don’t miss it this year. It’s really special, and a near-perfect way to spend a glorious weekend outdoors! (Extra bonus points for being able to shop until you drop at vendor booths or the restaurants and stores open at the WALK).

Tickets are needed but are free for the “workshop” led by renowned Cherokee Storyteller Gayle Ross and Dr. Caren Neile, known as “The Public Storyteller,” and is something the whole family can share. Held Friday evening, March 18, 2022, at 6:30 PM at Coral Springs Center for the Arts, the workshop highlights the nearly lost art of storytelling.

The two-day festival takes place at the WALK 2600-2920 University Drive from 10 am-5 pm daily and features a professional juried arts and crafts show with over 200 fine artisans and crafters and Gardenfest.

Throughout the weekend, festival-goers will enjoy a wide variety of live music, dance exhibitions, theater, and literary performances, and a children’s area.

For more information on the Coral Springs Festival of the Arts, visit www.csfoa.org.